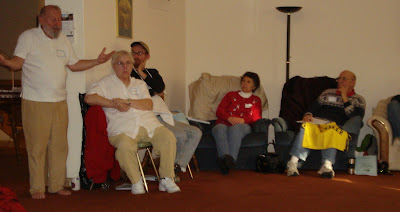 Jasiu instructs while Ruthmary, Jonathan, Mary and Bob look on.
The Catholic Worker house was filled to the brim last Saturday, as 35 participants and 3 facilitators engaged in an 8-hour nonviolence training. The event was sponsored by the new Columbus chapter of Pax Christi. We were pleased to host Jasiu, Sherri and Mary of the Michigan Peace Team who drove through Lansing blizzards and ice to make this happen! 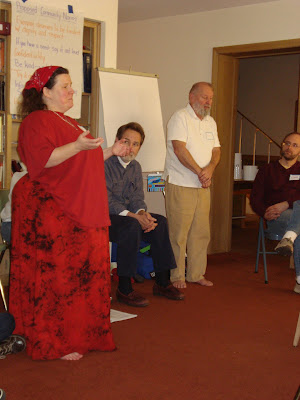 Pictured above are Sherri, Tom, Jasiu and Frank
As Pax Christi and so many other groups have shown us, nonviolence is the best and probably the only way to bring about true, long-term peace. However, just as I surely would not want to go into armed combat without adequate training, I certainly would not recommend attempting to resolve a conflict nonviolently without training, either! This is what groups like the MPT teach.

The morning session was an introduction to nonviolent communication skills--how to talk in a non-aggressive way and healthy, productive ways to respond to aggression. 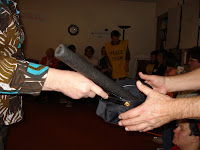 A good portion of the afternoon was spent in role plays, working out ways that people could react in various situations to be a presence of peace. What would you do if you saw the police beating up a guy? What if you were part of a demonstration that went awry? Jasiu told a story about how he and his wife intervened when they ran across a man beating up a woman in public. Spouses and friends can become "affinity teams" and work out ahead of time how they might react as a team to situations like that.
As the pictures can attest, we took the roles of police, demonstrators, antagonizers, peace team members and bystanders. We put ourselves in the shoes of these people to see things from their perspective. Much of the work of the MPT involves being a peaceful presence at gatherings and demonstrations. They also send international teams to be observers and peacekeepers in troubled areas such as Palestine and, more recently, Mexico. 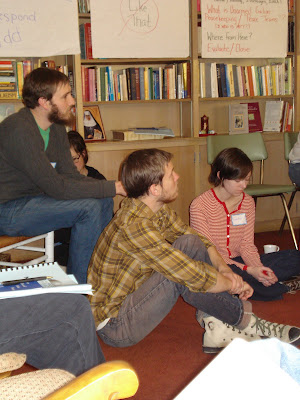 Jonathan, Kelly, Jonathan and Heather are deep in concentration above.
At our gathering were members of many different justice groups, different religious affiliations and folks ages 18-80. It was a wonderful opportunity to network. While the event was originally conceived as a chance for the new Pax Christi group to gel together, it ended up being a service we provided to the larger Columbus peace community. We are quite pleased with how it turned out, and we saw a snapshot of possibilities for the future--How wonderful it would be if the CW house could be gathering spot for the larger Columbus peace & justice community!
It is my belief that Columbus is ripe for this type of organization. We are a new and large city with many progressive elements, but we don't have the deep structures and our grassroots groups don't have the same long-term history like I saw in Cleveland and Akron. As prior generations have shown us, the key to any effective, nonviolent social change is to organize, organize, organize. Today, a larger percentage of the population want social change but there is overall less organization and, as a result, less effectiveness. 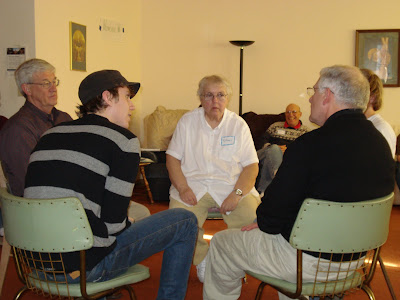 Fred, Joseph, Ruthmary, Mike and Jason gather around as an affinity team to work out how to handle a difficult situation ,with Bob looking on in the background. 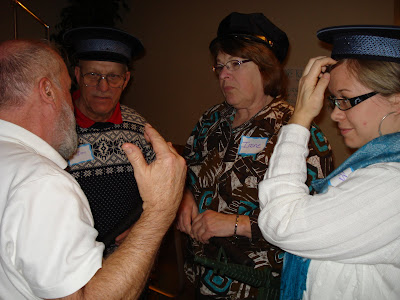 Jasiu instructs the new team of "police officers" for the upcoming role play. Bob, Irene and Julia are ready for action!
* * *

In related news, one of the founders of the Michigan Peace Team, Fr. Peter Daughterty, was recently honored in India with the International Gandhi Award. He also has the distinction of being named the 2002 Teacher of Peace for Pax Christi USA (Dorothy Day was the first Teacher of Peace, named in 1978--some great names on that list!) I had the great privilege of meeting Fr. Peter at the recent Pax Christi gathering in Chicago, he said Mass and I later talked to him about the MPT.
Posted by Frank L at 5:37 PM

Congrats to all: sounds like a great event. i would love to read some of the CW history that the MPT offered... Jean