The house was positively throbbing with activity the past several days, with two very different events on the weekend and another one last night:

Just so you don't think we're serious all the time, Erin threw a very wonderful Swap Party! Folks brought items to trade in for items that other people brought. People received a poker chip for each item they brought which they could then redeem for other items. 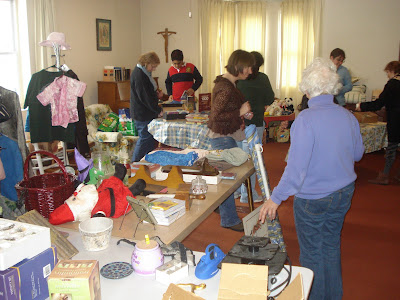 The living room was filled with tables of household goods, purses & shoes, knick-knacks and toys. I never thought my 2006 commemorative Burger King Bobble Head would find a home, but it was one of the first items to go. Erin warned me not to bring junk, so I almost decided against showcasing that one! The old adage is true that one person's junk is another's treasure.

While it was a fun, social time, it also served a purpose: In our modern society, we are trained to be independent. We often take for granted that the only way to get something is to buy it ourselves. Erin's swap party showed another way: People can simply share what they have. You may find something unexpected or perhaps you may find exactly what you've been looking for. 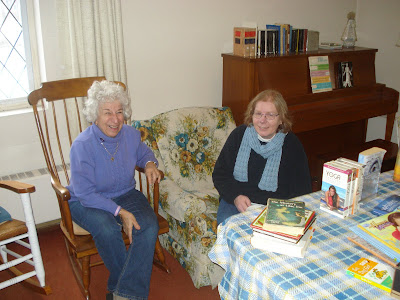 Ginger shares details of her recent trip to the Holy Land with Charla above.

Folks were thrilled to get rid of stuff they had around the house they no longer wanted. They were also equally thrilled to take home "new" items from others--and not a single cent was involved in the transaction! Leftover items were shuttled to the Catholic Worker Free Store, and perhaps kept until the next Swap Party. The main question that folks were asking was--When is the next Swap Party? The answer: Pretty soon! Stay posted for details as they unfold. 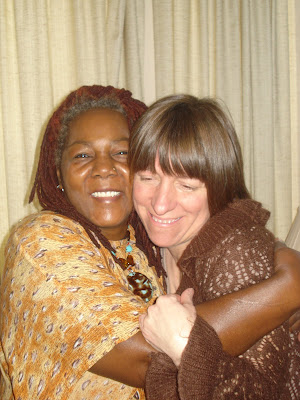 We have long since wanted to offer health-related services through the Catholic Worker house. Columbus Public Health and Mt. Carmel Church Partnerships asked us if they could set up a clinic for free H1N1 inoculations, and we gladly accepted.

The event was a success with 142 people inoculated! There were folks from the parish and neighborhood. The majority of the clientele were from the 12:30 Spanish-language Mass at St. James the Less.

The building was packed, but the line moved quickly. Snacks of fruit, granola and donuts were moving quickly. Joan and I spent much time constantly mixing up new containers of frozen juice. The medical teams were 100% professional and did a classy job registering folks, shepherding the line and giving the inoculations themselves.

Clinics such as this one are often in uncomfortable or cramped quarters, based on where they are at. We were glad to help provide a homey atmosphere for everyone involved. Children in particular thoroughly enjoyed playing with the Thomas train set that Erin recently donated to us! 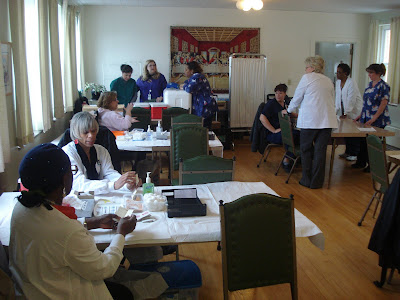 Nurses and administration personnel are setting up for inoculations in the picture above.

Children will need follow-up shots after a month, so we are looking into options to providing that clinic here, as well. Clinics like these are important, as the population is still not adequately immunized to offset the next wave of the "swine flu" which is expected to hit soon. Latinos in particular are high-risk for developing life-threatening complications from it.

Click here for a listing of upcoming vaccination clinics through Columbus Public Health.

The garden steering committee decided to host three informational tutorials in the months of January, February and March. Last night was the second one. Both events so far were a wonderful time of community and friendliness. Jean is becoming famous for her creations out of the "Monastery Soups" book. Yesterday was cabbage, potato and chicken soup, last month was--believe it or not--Brussels sprout soup. Others brought fruit and desserts. At the January meeting, James and Etta brought the largest chocolate cake we've ever seen, and Debbie has baked a cake for both events, as well. We cracked open one of our few remaining jars of homemade salsa, too.

Last night, we were treated to a talk by Lisa, who is an inspector for The Ohio Ecological Food and Farm Association (OEFFA). She is a prolific organic gardener both at home and work. She gave a wealth of practical information about how to grow and maintain an organic garden, including everything from maintaining the soil with compost, choosing organic fertilizers and pesticides, and managing pests.

This year's gardeners promises to be a stellar group. They are a mix of neighborhood folks, parishioners and others who have come through the Catholic Worker network. We are quite pleased at how it is turning out!

Jean also decided to brew a batch of our recently-arrived Just Haiti coffee. Folks were quite pleased at the flavor. When we announced at the end of the meeting that we have bags of it we can offer for a donation, two people quickly took us up on the offer. We certainly do not profit on this at all (in fact there is a small loss until we are able to buy in bulk quantities), but we are happy to distribute it for a very worthy cause. See the post below for more information.

Join us on Saturday, March 13th from 1pm - 3pm for a Seed Starting Party! Joan and Orchlene will be leading the session. Bring you containers, pots, seeds or anything else you can think of, or just come to learn. We should have some materials to share, as well. In some cases, one package of seeds can grow dozens of plants, which can yield a tremendous cost savings.
Posted by Frank L at 11:34 AM