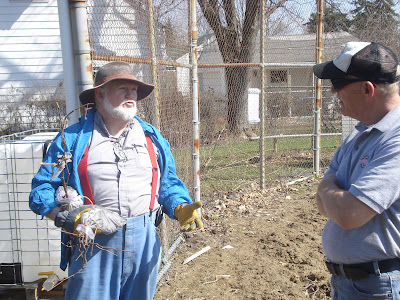 Above, Fr. John discussing the finer points of grapes with Bob on Friday.

Our community garden was given a wonderful treat this past week. Fr. John, a local grape enthusiast and expert, offered us grape starters from his family's farm in southern Ohio. He also offered to give a public tutorial about planting and pruning grapes. We did this on two separate afternoons, this past Friday and Saturday.

There is a lot more to proper grape planting than I ever could have imagined! Fr. John showed us the nuances and tricks he has learned over his years tending grapes. We first dug large holes around the fencepoints. A special root hormone and beneficial fungi were placed around the roots. We used last year's compost, which is rich and ready to use, mixed with some topsoil and peat moss to put in the holes. The grapes were then planted, thoroughly watered, and covered up. They were also snipped to no more than two buds per plant. 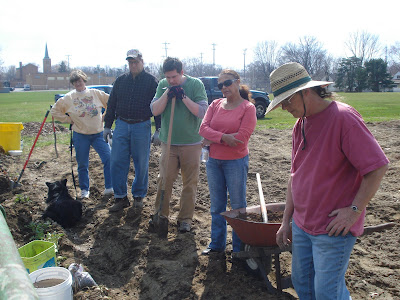 After the planting, the group traveled a couple blocks to the home of one of our garden leaders, Orchlene. She had some unruly grapes in her backyard, so we got a chance to learn how to prune grapes and get them ready for the new year. I probably need to witness this a couple more times before I feel comfortable, but all of us did learn a lot. While doing that, we dug up 7 red raspberry plants that had spread like wildfired and were interfering with her grapes. Later in the day, we planted all 7 at the St. James community garden. 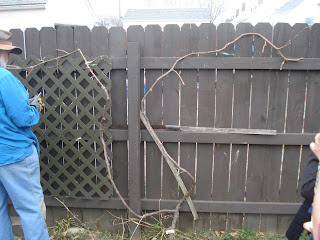 We had plans to start a perennial garden this year, and the offer of grapes came serendipitously right after that. Also, the raspberries that Orchele would have just thrown away were like gold to us--buying 7 raspberry bushes would have set us back quite a bit if we were to buy them at a nursery. It is amazing how these pieces come together. The sad part is that we won't see any fruit from these this year and quite possibly not even the next, but when it comes we'll be so glad we did this!

The prior Saturday, Joan and Orchele led a seed starting session at the Catholic Worker house. Over a half dozen folks come out to plant several trays of seeds for the community garden as well as for themselves. There are over 15 trays of seeds perched in windows throughout the Catholic Worker house. They are sprouting nicely. We have several trays of marigolds (perfect as an organic repellent to garden pests), tomatoes, peppers, Brussels sprouts, cabbage--you name it. 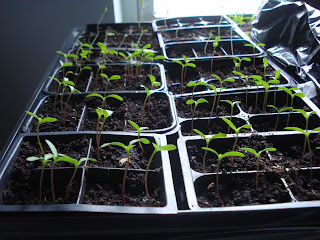 A tray of new sprouts upstairs in the Catholic Worker house.

Planting our own seeds saves a great deal of money, and it brings us one step closer to the whole life cycle of our garden. We have been blessed with quite a bit of seeds still left over from last year as well as donations from folks this year. Fr. John also gave us a large zip lock back full of dried hot peppers--each full of seeds!

Zeila worked hard to save seeds last year, especially from marigolds. This year, we are going to focus on saving more seeds so that we can be a totally self-sufficient garden!

We had our third and final Garden Tutorial meeting last night. Suzanne "Queen of the Compost" led us in a presentation about the finer points of composting. Kirk followed that up with a round of "Garden 101" principles. We were happy to see a nice representation from the Latino and Vietnamese communities. Zulma gave a presentation at the Spanish language Masses last weekend, and we also got some participants from our ESL classes.
Posted by Frank L at 10:29 AM