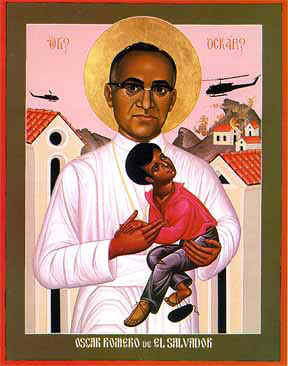 Today, March 24, 2010, marks the 30th anniversary of the martyrdom of Archbishop Oscar Romero of El Salvador:

A prayer on the 30th anniversary of Romero's martyrdom

It helps, now and then, to step back and take a long view.
The kingdom is not only beyond our efforts,
it is even beyond our vision.
We accomplish in our lifetime only a tiny fraction
of the magnificent enterprise that is God's work.
Nothing we do is complete, which is a way of saying
that the kingdom always lies beyond us.
No statement says all that could be said.
No prayer fully expresses our faith.
No confession brings perfection.
No pastoral visit brings wholeness.
No program accomplishes the church's mission.
No set of goals and objectives includes everything.
This is what we are about.
We plant the seeds that one day will grow.
We water seeds already planted,
knowing that they hold future promise.
We lay foundations that will need further development.
We provide yeast that produces far beyond our capabilities.
We cannot do everything, and there is a sense of liberation
in realizing that. This enables us to do something,
and to do it very well. It may be incomplete,
but it is a beginning, a step along the way,
an opportunity for the Lord's grace to enter and do the rest.
We may never see the end results, but that is the difference
between the master builder and the worker.
We are workers, not master builders; ministers, not messiahs.
We are prophets of a future not our own.

(Prayer written by Bishop Ken Untener, attributed to the words of Archbishop Romero.)

Oscar Romero is often called the "Martyr of the Americas of the 20th Century." He served as the Archbishop of San Salvador for three years. The murder of one of his dear friends, Father Rutilio Grande, caused him great pain and set him on a journey toward becoming one of the greatest prophets Catholic social justice activists have ever known. He spoke out against the government repression in El Salvador and against the poverty, hunger and helplessness of the majority of the Salvadoran people, during a time when those who spoke out and publicly opposed the situation were killed or "disappeared."
Posted by Frank L at 12:52 PM

That is such a beautiful prayer. Thanks for sharing Frank!