We all have our causes. We have to pick what we are involved in and leave the rest. There is simply no time in the day to do it all. We'll burn ourselves out and be ineffective if we continually move from issue to issue.

Yet, there comes a time when momentum is gathering and the timing is right to leave our picks and shovels in the fields and rush to join with our neighbors in solidarity on a single issue. The time is now and the cause is immigration reform. 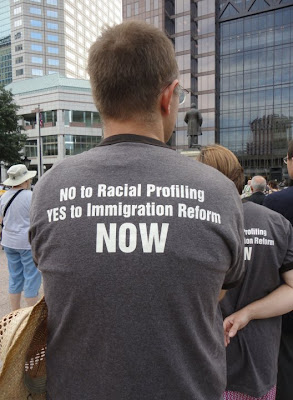 Last night was a proud moment, as leaders from many churches and faith-based groups gathered together to call for a reform of our immigration system.

It is time to take a stand so that Ohio does not fall victim to the mentality that is making Arizona start to resemble a police state--with citizens needing to carry their papers as if it were the Soviet Union. Folks live in fear of vigilante groups intimidating the population, even terrorizing people who are here legally.

As people of faith, we have heard the cry of the poor. Our immigrant sisters and brothers have been abused and exploited by the immigration policy of the United States:

* Our businesses take advantage of immigrants for cheap labor and by putting them in hazardous work conditions. The threat of deportation prevents people from complaining.

* Our immigration officers split up families, often leaving children behind to fall prey to gangs, drugs and violence.

* Our current immigration policy is unfair and unfairly enforced. It is easy to become a citizen if you are a professional basketball player, but odds go down considerably if you are a poor farmer. Also, few in the USA seem worried about undocumented immigrants from places such as Canada or Ireland. The real concern seems to be Latinos and others with different skin color.

* Our own so-called "fair trade" policies have impoverished much of the developing world, virtually forcing people to leave their homes for a shot at a better future. For an example, look at corn subsidies which pay our US farmers so that they can sell their corn below market rates--they have almost destroyed the local agriculture markets in Mexico, impoverishing people who once made a good living as farmers.

* US-trained military have terrorized the populations of Latin America for decades in a systematic policy of war, torture and rape, leaving many risking all they have to flee to the north. These military actions interrupt development and put down movements of people struggling for better standards of living.

It has long since been time to reform our immigration policy.

This is a humanitarian issue. What would compel someone to leave their family and their homeland behind, to risk life and death to cross the border illegally, to work for less than minimum wage in hazardous conditions in the USA? The only logical answer: The alternative is worse.

Most red-blooded Americans would cross hell and high water to do the same for their own families. This is a family issue.

What does this mean? These people should be classified as refugees fleeing for their very lives and need to be harbored and given asylum as such. At the very least, if people come to America to work there should be a way to naturalize into this country and remain here if they have built a life here. Families should be kept together.

I have to admit I’m a sucker for sentimental moments. One of the reasons I love being in peace & justice movements is that there is no better place to see people of different faiths working together, genuinely respecting each other and respecting the differences they bring to the table. Yesterday, I saw some of my heroes from different faiths standing—literally—hand in hand on the stage in front of us.

People brought their unique perspectives and flavor, such as the Jewish rabbi who sounded the ram’s horn which reverberated both throughout downtown and deep within our bones. The ministers, priests and pastors showed—either directly or indirectly—their reverence for each other and they fact that they have learned from each other.

People say there are moments when you get a taste of heaven, and for me this was one—when the whole body of God’s people stand as one. Nobody was trying to make a name for themselves or steal the spotlight or refuse to give ground—yet they all stole the spotlight and they all gained ground!

This is how it is supposed to work. When differences are things that enhance rather than detract, when humility does not make us smaller but rather makes us bigger. This is a group of people practicing what they preach, reminding us of who we are as a people. 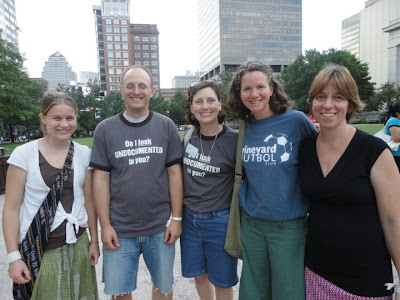 The above picture will serve as a reminder to always carry a camera to have a chance for a do-over! Still, everyone else looks great, so in all humility here is our little Catholic Worker group and some friends: Kaitlyn, Frank, Nancy (from Justice for Immigrants), Erin K and Erin W.

Of particular interest were the counter-demonstrators. They were staged along High Street, hoping to distract our rally with the honking of detractors. I didn't hear much honking, but there was some.

Some of their signs read:

What part of illegal don't you understand?

Slavery was once legal, too. In fact, folks who harbored escaped slaves in the Underground Railroad could have faced the harshest of penalties. Now, we call them heroes.

Woe to anyone who tries to reduce the Gospel of John, which its sophisticated interplay of themes and symbols, into a one-liner. But I just had to look it up. It reads:

Amen, amen, I say to you, whoever does not enter a sheepfold through the gate but climbs over elsewhere is a thief and a robber.

It is quite a stretch to think that the "sheepfold" here implies citizenship in a political state such as the USA, but I'll play along for a moment. Let's read a little more of the passage. Here's the very next verse:

But whoever enters through the gate is the shepherd of the sheep.

So wait a minute... those who do not enter through the gate are like undocumented people in the USA, but whoever enters through the gate is the shepherd. So does that mean the rest of us citizens of the USA are shepherds? What does THAT means? Let's look at more verses:

Although Jesus used this figure of speech, they did not realize what he was trying to tell them. [seems to be a common problem]. So Jesus said again, "Amen, amen, I say to you, I am the gate for the sheep. Whoever enters through me will be saved, and will come in and go out and find pasture. A thief comes only to steal and slaughter and destroy; I came so that they might have life and have it more abundantly.

In other words, the gate is not the border crossing station, as the detractors seem to be implying--Jesus is the gate. All who enter through him are saved. And Jesus seems to be okay with people coming and going to find pasture, if they need to feed themselves. The end result is that through Jesus, they are to have life and have it more abundantly.

The grim reality is that the USA accounts for only 5% of the world's population. We consume nearly 50% of the earth's resources. What else can we do but share?

A great reference is the US bishops website: www.justiceforimmigrants.org
Posted by Frank L at 9:31 AM