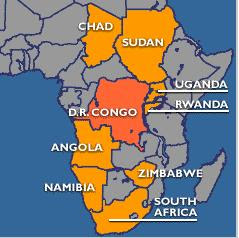 We have been hanging out with a young family from the Democratic Republic of Congo lately--a mother and three children. They recently arrived to America, and we have been helping out with a few things—they got clothes from our free store, produce from our garden, and they just came last night for ESL. The two young men got interested in the soccer playing outside, and Vielka went out there and strongly told the Latino guys to welcome them--which they did without any hesitation.

Kaitlyn and Joan have been communicating with one of the sons in French, and he then translates to his mother and siblings who don’t know any European languages. There is a refugee placement agency helping them, but we are trying to be an extra support as a family like this needs so much. Kaitlyn is tracking down further ways to help out.

Minerals are right at the center of much of the fighting all over Africa. Diamonds are a major culprit, but in the case of the Congo it is rare minerals used in cell phones, laptops and digital camera. Some of the fighting is just for sheer profit--legal or otherwise--and other times it is to fund military actions of one kind of another.
I saw an excellent documentary on the History Channel recently called Blood Diamonds: Beyond the Bloodshed (click the link to watch it). I was horrified to learn what has been going on in Sierra Leone and Angola—militia groups terrorize the countryside using gruesome methods of torture, amputations and rape intentionally to displace the population away from diamond mining deposits. They put many people into slave labor mining camps to finance their military actions.
There is a movement now to market “conflict free diamonds.” This is to give some assurance that the diamonds you buy do not come with this kind of history. I applaud the efforts but right now the “conflict free” tag is not very reliable since there is not yet sufficient third party monitoring, but it is a step in the right direction.
What has been going on in the Congo is not much different. Due to widespread sexual violence, eastern Congo right now is the most dangerous place in the world to be a woman or a girl. Disputes over mineral rights have fueled a war in which over 5 million people have died and 1 million have been displaced.
Coincidentally, I’ve been gettin action alerts about the Congo from Catholic Relief Services. Right now, there is major legislation pending to address this very issue. The bishops in the Congo themselves and other human rights groups recommend more accountability—to bring a reliable “conflict free” label to all minerals through the entire supply chain.

I got a text message this morning from CRS saying that the provision below to include “Congo conflict minerals and other transparency provisions” got approved by the US Congress and will make its way to the desk of the President soon!
I would recommend keeping a watch on this issue. This bill does not solve all problems, but it takes a giant leap forward to begin an accountability process.

We have heard many gruesome stories about genocide in Africa in recent years: Rwanda. Darfur. Zimbabwe. Sierra Leone. The list goes on and on. It may be hard to believe that a situation could ever be any worse than those, but reports are showing that the war in the Congo right now is considered the deadliest since World War II.
One way to make a difference is to urge companies that make electronics to use conflict-free materials. Click this link to learn how.
In the meantime, one young family from the Congo is trying to resettle in Columbus, OH.
Posted by Frank L at 10:41 AM