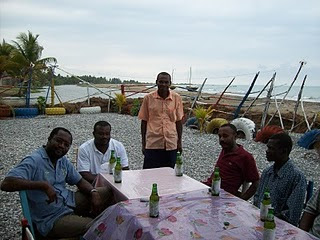 Snapshot of some of the coffee growers in Haiti.

Kim from Just Haiti keeps a blog about her peace & justice journey and covers many topics such as Columbia, Palestine and, of course, Haiti (see below for link).

The above picture is from her blog and shows some of the folks who make the coffee we enjoy so much here in Columbus. They are celebrating receiving one of their first checks for the profits from their coffee and decided to crack open some beer and have lobster on the beach!

Keep in mind that "beer and lobster" is not standard fare in Haiti. It is a strong symbol that even in the tumult, turmoil and outrageous poverty in Haiti, at least a few people are able to breathe a sign of relief and take more steps forward in life than back. Your purchase of their fairly priced and fairly traded coffee just gave these folks a chance at a better life.

You may be amazed to discover what other kinds of tremendous changes your coffee dollars are supporting in Haiti, and they go far beyond a celebratory dinner among friends. Here is the full story from Kim:

And now on to my favorite topic: coffee! I had some great meetings with the coffee growers' association (called KDB) and feel optimistic about what is happening there. I brought them their first check of profits from coffee sales. The way the project works is that they get a fair trade price for their coffee, and then after taking out expenses from the sale of it, they also receive the profits. The profit they made was higher than the original price we paid for the coffee, and the original price was much higher than market price. It just goes to show that somebody is making a lot of money in the coffee business, and it is not the growers.

I went with them to open their bank account, where they decided that three people should be signatories, and at least two have to sign before money could be removed. They were so proud...it is the first time for any of them that they have money to open an account!

The growers are working to expand the association to include more people. During a meeting, one of the growers said to the people that we are not only just growing coffee in this project: we are regenerating the coffee business in Baraderes. Until the mid-1980s, coffee was the main industry in Baraderes. It was destroyed when the coffee market crashed all over the world. It is a long story about why it collapsed, but basically it was because of an ill-conceived USAID project that funded large plantations of poor quality coffee in Vietnam and Brazil, thereby lowering the prices all over the world and thus putting small farmers out of business and exacerbating poverty in some of the poorest places in the world, including Haiti. We are regenerating the coffee industry in Baraderes, but in a way that benefits small producers, and not plantation owners or large multinational coffee companies.

Another person talked about how the association was not just about coffee: it is also about forming community and becoming like family for each other. With their profits, one thing they have done is to create a fund that will provide money for health care if people get sick, and they are also talking about ways to provide an advance to growers on their coffee sales so that they can pay their children's' school fees. They are also using part of their money to provide food to needy families after the earthquake (Just Haiti is also helping with that). I am proud to be a part of this, and I know that many of you are supporters in one way or another, and you should all be proud, too.

Before folks start thinking that Haiti is all "beer and lobster" on the beach, here is a snapshot of Baraderes, the region where the coffee is produced: 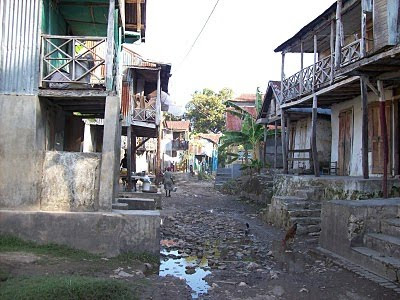 Check out her blog for the full story on the coffee growers juxtaposed against the tremendous poverty in Haiti: