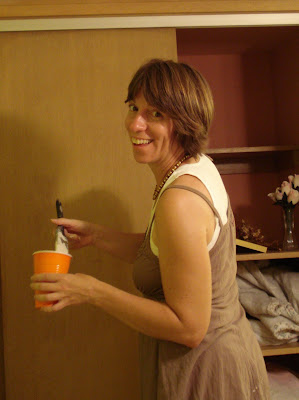 There is absolutely no question that the wind beneath the wings of the Columbus Catholic Worker has been Erin W. (formerly S). She has been with the group almost since the very first days. I dragged her to the St. Therese Retreat Center as our fledgling group put our heads and hearts together to discern our future. In fact, I dragged her to lots of things, at the beginning.

She kept her distance at first. She didn't join the core group for a long time. But if there was a problem or work to be done, guess who was there? That's right. There were times when I felt abandoned, and she would step in--in fact, that's how she joined the core leadership team in the first place. In the last four years, she is the one person I could call on who would be there, even if it pertained to a ministry she wasn't actively a part of. Even when she was an "unofficial" Catholic Worker, she perhaps best embodied the spirit out of any of us.
However, her reluctance was short lived. She soon became a regular part of our community life.

She was the one rubbing Glenda's feet at night (literally) as the stress and strain of providing overnight hospitality was wearing on folks. In fact, it was Erin who actually referred Al and Pandora to Emmanuel House in the first place (the guests who stayed the longest), and she played a key role in helping them move on. She was there when I had guests in my apartment.

Her direct ministry contributions are a long list. She steered the ESL group for the last 10 months, including single-handedly rescuing it from the brink. The beautiful, warm and inviting atmosphere of our ESL program owes a large debt of gratitude to her. Erin loves teaching: She often had the class dancing and singing, as she pulled out ideas from her nearly endless array of camp songs and games. Students love her. She led a book study this summer and last summer. She organized the Swap Parties. She provided key leadership to get a number of ministries off the ground, ministries that were the fruit of the whole community but which might never have happened without her--the Garage Sale, Canning Classes, etc.

She's been a mentor and friend to just about everyone who has come through the door here at 1614.

However, her contributions perhaps are best thought of as qualitative more than quantitative. She has been a huge support behind just about everything. She has always been there to lend a hand when emotions bubble over, when there would be a need for conflict resolution (which you can imagine happens in community). She has provided endless advice and insight into our administrative processes, finances, community building, lease negotiations, you name it. Few of our ministries have not been impacted by her superb strategic planning skills, either through her direct facilitation or as a sounding board for others. Her fingerprints are everywhere. I almost never have walked into a difficult meeting without first consulting her, and the few times I did I regretted it. She's been there to help people move boxes, paint a wall, jump down to the food pantry to help in a pinch or just rap on the phone for a couple of hours. She's also been one of our best tour guides and can throw one heck of a party! 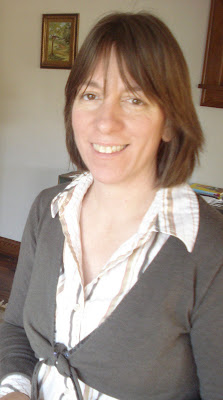 For better or for worse, the CCW decided on a somewhat hierarchical structure with a director, core leadership group, leaders of specific ministries, and volunteers. [It is also my hope that we can eventually morph back into a more communitarian structure, but that is a story for another day.] The director role is fulfilling and wonderful, but it can be a very lonely place to be. It is also an illusion, as no one can do that job without a near-constant lifeline of support from somebody. That person to me has been Erin. Personally, Erin's been on my emotional speed dial the last few years. When times get tough, when the world is bearing down on us, when circumstances have been dark (and there have been some really dark times), she is the one who takes the call. She's been my paramedic, my nurse, my psychotherapist as well as my general care practitioner. It is hard to imagine how much whinning and ranting she has listened to from me!

Hopefully, folks in the larger community know of her and are aware of her contributions, but I think all too often she has managed to stay enough on the sidelines not to get noticed. I apologize for this. Certainly anyone who has walked through the door here knows her well. She has been there in all the big-little things that never make the headlines, but if you have been around, you know how important they are and what a presence she has been.

Erin's moving on a bit. She's still our friendly neighbor, and I hope she'll never be a stranger here, but she has decided to put energy elsewhere for a while. It is a rest well-deserved for a job well done. Whether we see her again tomorrow, next month, or next year, regardless, it is long overdue to give a proper shout-out to her!
And most of all, Erin, thank you!
Posted by Frank L at 10:34 PM

I have been blessed to be a part of the Columbus Catholic Worker and will hold you dearly in my heart. I thank you guys for all the hospitality, love and service that you express.

I was glad to lend some of my time and skills to the meaningful projects at the house.

I am sad that I need to let go of the CCW as a priority but I have faith that there is something new upcoming for me and I believe that is true for the CCW.

Thank you for this lovely tribute. I truly got just as much out of this experience as anything you may have received from me.

Wishing many blessings on the house, its inhabitants and the community surrounding it! Love, Erin